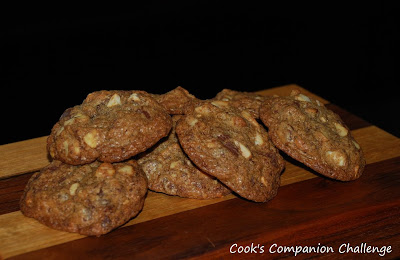 I love a good chocolate chip biscuit as much as the next person and I especially love them home-made and straight out of the oven.

I think the best thing about this recipe was the roasted nuts which added an incredible flavour and meant that even with a stack of chocolate chips in there, the biscuits were not overly sweet. I used lots of walnuts and also some macadamias and almonds in this batch. For anybody planning to make these I recommend you do not skip the nut roasting step!

Knowing how much my family love chocolate chip biscuits I doubled the recipe, and in fact still have two rolls in the fridge ready to be sliced and baked. I am not sure what happened measurement-wise, but rather than getting 15-18 biscuits from each roll I got around nine. Admittedly the biscuits were of a generous size but I thought I had roughly followed the directions for diameter and thickness of slices.

Learning: Always double this recipe! The family will certainly not be complaining. 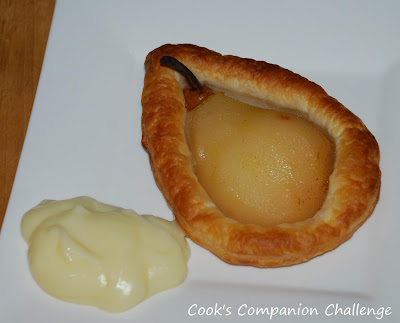 In an attempt to get ahead of the fruit-we-are-not-good-at-eating issue, I decided to end a wonderful week with my very first attempt at poached pears. To make things even more interesting, I noticed a margin recipe for this simple pear puff tart and thought (quite rightly as it turned out!) that it might make the boys more excited about eating a pear for dessert.

Getting my pears to stand up in the sugar syrup was a challenge, and given that I halved the recipe I also found the syrup not quite deep enough to cover the pears. I decided that if I added other things to the water the level would rise sufficiently, and so in went three empty egg coddlers. The water level was nicely raised and even better, the coddlers provided a cosy little resting place for my pears which were now standing up nicely.
I would have liked to share the details of how long my pears took to poach, but I fear I forgot to look at the clock. I am fairly sure it was about one hour and the pears were perfect; not too soft, not too hard.

The fruit was supposed to cool in the syrup and of course being a Sunday night I was impatient for this to occur naturally! Half filling the sink with cold water, and standing the saucepan in it, sped the process up nicely. Turning the sweet, sweet pears into tarts was as simple as cutting some pastry to size and baking for ten minutes. In the short time the tarts took to cook, I made a simple custard in my thermomix. Honestly seven minute custard from scratch, how impressive is that?

To my delight the family adored this simple dessert and for the first time in ages we cleared our fruit bowl of pears within days of them arriving. I had to giggle as last night I mourned the lack of a crisp pear while finishing off a particularly lovely Danish Blue. Oh the irony! 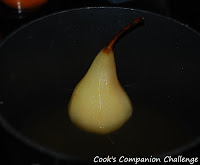 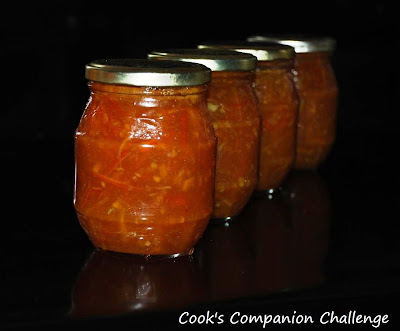 I have finally made marmalade!

I have mentioned before that we sometimes have trouble keeping up with our fruit delivery and last week we seemed to have oranges coming out of our ears. The marmalade recipe is a two day event and so I wisely started making it on Saturday - look at me pre-reading a recipe for once!

The first step was to peel the oranges and lemons and then to julienne the peel. Good lord that's a lot of chopping. My mum came over for a cup of tea as I was in the midst of turning a pile of peel into neat little strips, and so I did what any good daughter would do. I handed her a knife and asked her to chop while we chatted. Lucky for me I have a lovely mum who likes cooking as much as I do and so she didn't mind a bit.

The next step was to juice the fruit and I decided to try out a tip that was given to me recently (thanks Wendy!) and after cutting all of the pith from the fruit, threw them into the thermomix and had a pulpy juice in seconds. Not only was it a super fast way of juicing, but it also meant that not a scrap was wasted. When you pay top dollar for organic produce, waste is not your friend.

So it turns out that the special trick to making sure your marmalade sets correctly is to tie your pith inside a square of muslin and add it to the cooking pot. Once your marmalade has reduced by half, the pith and the pot stay on the stove top over night and the next day your soggy little bag of pith is squeezed out and discarded. 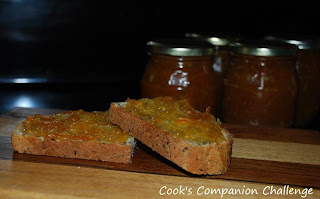 Before adding the sugar to the liquid it was warmed in the oven, which I assume is to prevent the liquid from cooling down when the sugar is added. The final step was to boil the marmalade for 5-10 minutes until the setting stage had been reached. I was waiting for my liquid to reach 104 degrees which seemed to take forever, and so in the end I tipped a spoonful on to a cold plate and after a few minutes realised that my gooey mess had turned into marmalade!
I am thrilled with the result, which is just as well because I ended up with six full jars of the stuff. My mum took one and we eagerly opened the second, pleased that it did not run all over the place (if anything it is a little thick!) and that it tastes just as it is supposed to.

I do feel a bit like a grandma now that I make my own preserves...next I will be potting meat and pickling my vegies...oh wait, too late...
Posted by Kate R at 7:38 PM No comments: Sometimes it feels as if I have been doing this cooking/blogging thing forever. Two years in, the challenge continues to bring me enjoyment, an expanded social circle and of course plenty of great food.

To celebrate this special birthday milestone I thought it must be stats time again! In the last two years I have;
A highlight in the journey has definitely been the launch of the CCC mystery guest dinner parties. Meeting new people is always fun and quite frankly, I think people should invite strangers into their homes more often. Life is too short to stay inside your comfort zone.

Thank you to everybody who is still on this journey with me. As interesting as the challenge is, it is ten times more enjoyable getting feedback from people outside of my little family as I progress through the chapters.

Here's to another two years!
Posted by Kate R at 8:43 AM No comments: 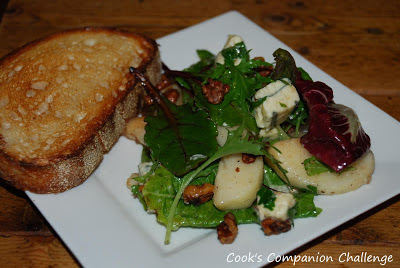 Oh my! If only every salad tasted this good...

We have our fruit and vegetables delivered each week, largely to remove just one from the list of regular jobs a busy family must tick off in order to keep a household running. I love receiving my delivery each Tuesday, but have noticed there are a couple of things we are slow to eat. It turns out we are not much of a pear eating family and so I decided, for the first time, to take a look through the pear chapter to see how we might use up the two that were still lingering from last week's box.

Unfortunately I did not have any witlof, but was lucky enough to have the rest of the ingredients on hand for this AMAZING salad. Pears, stinky blue cheese, toasted walnuts...an incredible combination. To make it even better, the toast served alongside was sour dough, painted with walnut oil and toasted under the grill.

I am thrilled that there is enough left over that I will be taking it, along with some leftover steak, to work for my lunch tomorrow. Bring on next week's pears!
Posted by Kate R at 6:23 PM No comments: 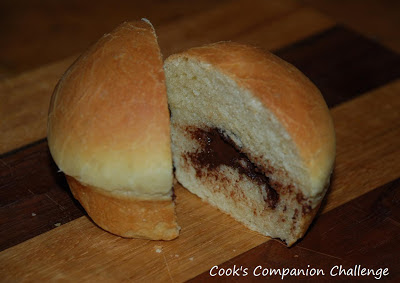 The dessert I made for my chocolate loving friend was chocolate brioche with mini baked custard rounds and berry sauce. My original intention was to make sultana brioche with a chocolate sauce but came to my senses and realised that a gooey chocolate inside would be much more fun.

Brioche dough was easy enough to make, although now that I am aware of how much butter is in there I don't think I will be eating brioche very often! I decided to cook mine in a muffin tin to ensure a lovely golden exterior, which meant that I needed to reduce the final stage in the oven from five minutes to two as I felt they were already beautifully brown and in danger of being overcooked.

The plated dessert was very awkward looking but tasted quite nice. The custard rounds were made with a chinese egg tart filling which can be found here but instead of making the pastry I simply poured the custard into a mini muffin tin and baked the rounds for about 15 minutes. The tray was oiled and so with a bit of teasing with toothpicks the custard rounds popped out quite easily.

And the very best thing about this recipe was finding a leftover brioche this morning which I enjoyed with a coffee. Not very healthy but a lovely and decadent way to start a Sunday! 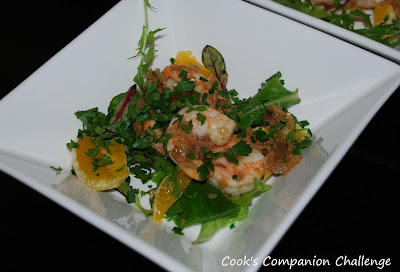 Tonight's dinner was one half of a present for a friend who recently reached a special birthday milestone. It is one of my favourite things to put on a dinner party with one person's taste in mind because the menu planning flows easily.

We had an unexpectedly late night the previous evening and so I was in less than perfect form for cooking. Wisely I decided to outsource the main course to Trev and focussed instead on creating an entrée and dessert centred around my friend's favourite things.

In my opinion, prawns are always a fabulous way to start a meal and I have been keen to try this little recipe for some time now. I cut a big corner and decided not to velvet the prawns, and while I am sure they would have been incredible if I did, nobody was complaining about the result!

Stephanie advised that this dish could be complemented with an orange and watercress salad. A close enough alternative was to dress the plates with finely sliced orange segments and add some beautiful organic salad mix.

I absolutely loved the gentle flavours of this dish and heard more than one person commenting on how well the lemon juice and orange worked with the spices. Little people and adults alike were pleased with the result, and perhaps a little disappointed that it was served in entrée sized portions.

Even better than serving up a successful first course was actually remembering to add the chopped herbs to the finished product. It seems there is a first time for everything.
Posted by Kate R at 9:40 AM No comments: