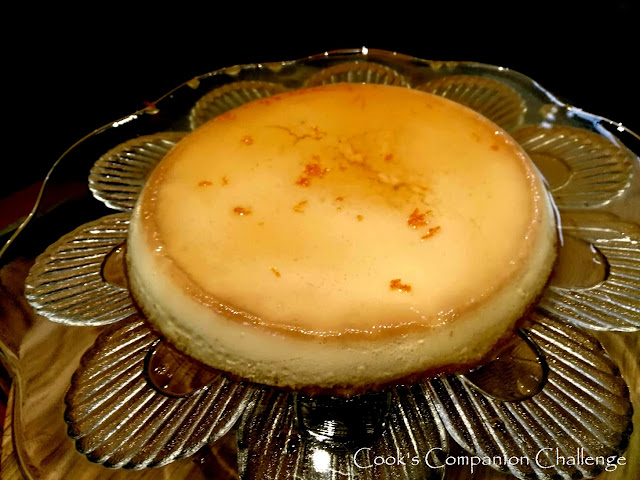 Another year, another wedding anniversary...

I am sure I have said this before, but celebrating on prescribed dates and present giving could be banned tomorrow and I would not give it a second thought. Christmas, Easter, Valentine's Day and the ever-divisive Australia Day could all disappear and I would be one happy camper. I do realise I am on my own with this one, but I am not ashamed to admit that most celebrations are completely lost on me. I am not religious, and in many ways not sentimental, so my feelings on this matter are not much of a surprise to those around me.

I think I would like to keep birthdays and definitely the verbal recognition of anniversaries, but if presents are given I would prefer that they be home-made and usable. The fact that people already have more stuff than they need, coupled with the angst of reciprocal present giving, is the stuff of  my nightmares.

So even though we don't always bother to celebrate another year of wedlock, today I decided to do a bit of cooking to commemorate the occasion. If I am honest, the date simply coincided with a desire  of mine to cook and hang out in the kitchen. But I am calling it romantic anyway...

I have been DREADING this recipe for the most ridiculous reason. I have another crème caramel recipe which works perfectly every time and I just hated the thought of trying one that might not be as good. To add to the pressure, Stephanie's version is cooked in one dish and I have always divided the recipe into individual serves. My main thought today as this dish chilled in the fridge was, "Please come out in one piece!"

I decided to listen to Stephanie's suggestion regarding orange zest, and steeped it in the milk for an hour before cooking, which was a really lovely addition to this simple dessert. I also threw some zest on top after it was turned out and served the dessert with slices of orange.

It feels good to have that monkey off my back!
Posted by Kate R at 8:39 AM No comments: 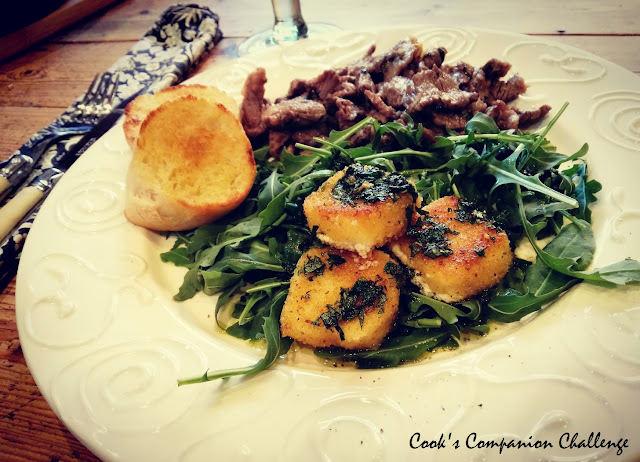 I used a jar of marinated goats cheese for this recipe, dabbing the oil from each piece of cheese with paper towel before the egging and crumbing stage. The great thing about goats cheese is that if it comes apart when sliced, it is easily squashed back into shape.

This is not a super fast recipe but by George it's worth the effort! Admittedly I did make the breadstick from scratch so other (sane) people who simply head to the local baker for a store bought version will not spend anywhere near the time I spent in the kitchen yesterday.

After a few nights without a substantial amount of red meat, I added some sliced and fried beef short ribs to the meal to appease the men in my house.

This was SO much more than a salad. Very happy with this one.
Posted by Kate R at 12:42 PM No comments: 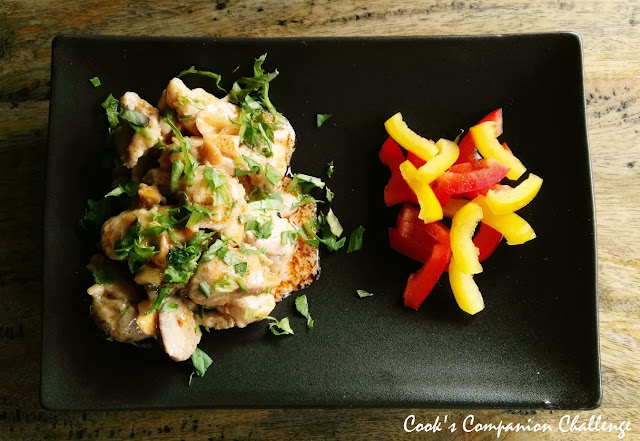 I am sure it is of no surprise that, at this stage of the challenge, I have exhausted many of the recipes which have ingredients that reside in my pantry.

Nowadays there is more planning involved in the cooking, and today this involved a trip out to pick up a small tin of green peppercorns and some coconut milk. I have no idea if it is common or just in my house, but I am forever using a half tin of coconut milk and then tossing the other half after its obligatory three days of taking up space in the fridge. Imagine how thrilled I was when I discovered 165ml tins!

I made 2/3 of this recipe tonight (I had only 500g chicken) and so this was the perfect sized tin for our dinner with not a drop of wastage. Colour me happy!

It turns out this was a very simple recipe and a good mid-week meal. I served it with jasmine rice and a pile of fresh vegetables (capsicum, tomatoes, rocket) which made it insanely fast to get to the table. Of course, I left a mountain of dishes in my wake but when I cook I am not on dishes duty so I don't see this as a problem!

Somehow I missed the fact that there was supposed to be fresh basil to scatter over the finished product and so I made do with finely sliced rocket; as it turns out, a more than satisfactory substitute.

Anybody who watches my blog regularly will be quite surprised that after an incredibly slow patch, I have now written six posts in little more than a fortnight. There is a reason behind this and it is a good one! I plan on having an incredibly busy year in 2018 and am trying to knock out as many recipes as I can before the madness starts in March. 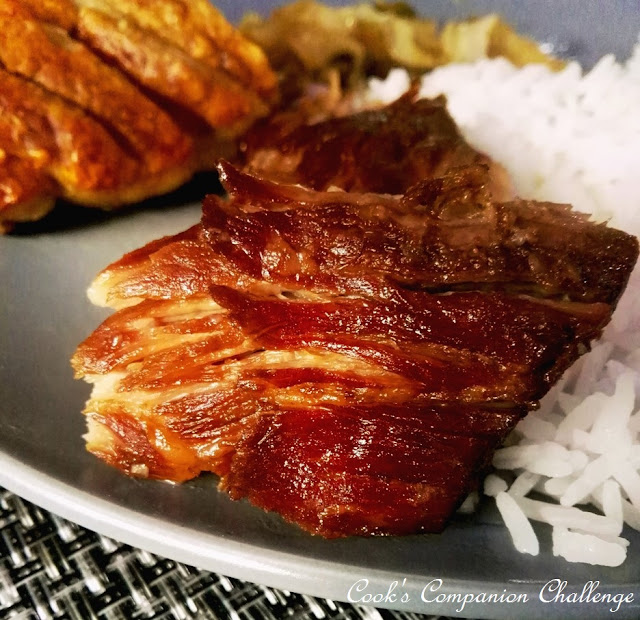 Honestly, we love pork belly...but Tung po pork! This dish was absolutely worth the hours it took to cook and was a tremendous way to use up yet another section of our enormous pork belly purchase. There is just so much belly; if you look hard enough you can see a piece of the roast pork I cooked at the same time. The crackling on that was FABULOUS...

The meat was so very tender it didn't require slicing but simply fell apart as it was handled. Amusingly, I forgot to add the sauce to the meal but have stored it in the fridge and plan to use it to enhance whatever veg combo I throw together tonight. It really didn't matter; the meat was full of flavour and an absolute delight to eat as it was.

Oh and look at that...a recipe not based around cabbage!
Posted by Kate R at 10:47 AM No comments: 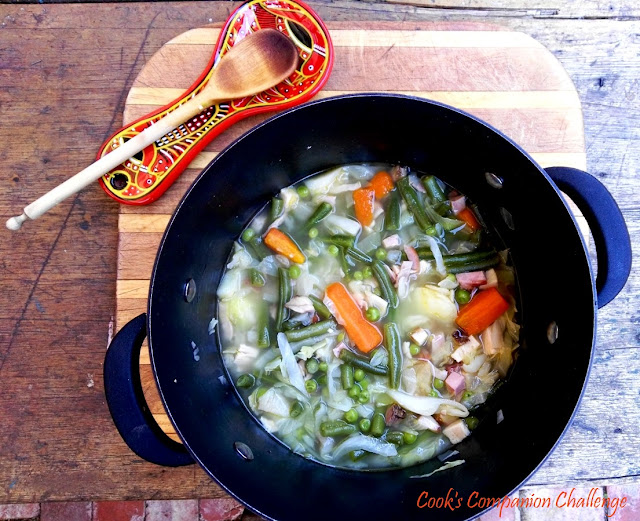 There has been a lot of cabbage consumed in our house lately and I lay the blame for this squarely on the shoulders of my husband. Whilst planning the execution of the cabbage parcel recipe (previous post) I added the following to our electronic shopping list;

Simple, right? Well my husband thought he was pretty clever buying me two cabbage halves...because two halves make a whole, right? Except that cabbage parcels are pretty hard to make with half-sized cabbage leaves. Fast forward and my fridge contained not one but two cabbages waiting to be turned into something fabulous.

So first came cabbage parcels and then a couple of nights ago I resurrected Stephanie's cabbage and anchovy salad (still wonderful). This soup was next on the list and even my boy who is not a huge soup fan was happy with the result.

We made a successful return to the Queen Victoria Market in the early hours of the morning (our first for 2018) and one of my big scores was a half kilo of meaty off-cuts which was largely bacon pieces with some of this and some of that mixed in. I used it in place of the slab of bacon listed in this recipe and it worked beautifully. It was of course a bonus that it cost only $3.50. Proof that a wonderful meal does not need to cost the earth.

LOVED this one x
Posted by Kate R at 9:45 AM No comments: 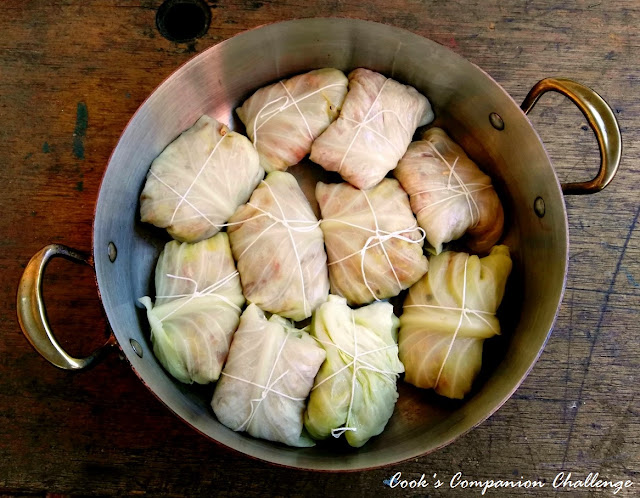 Whilst creating time consuming little parcels of food is not one of my favourite things, I do love an excuse to use my beautiful Mauviel copper rondeau. It is such a thing of beauty and one of only a handful of kitchen purchases I have made in the last couple of years.

This recipe was not especially difficult but I do think if I made it again I would take the lazy path and simply cook the stuffing ingredients with a pile of shredded cabbage. It wouldn't look anywhere as pretty, but the flavour would still be there and surely that's the main thing!

As expected, this recipe fed my family of four twice; the first night on a bed of mashed potato and the second with a load of extra cabbage and diced pumpkin added to the stock/tomato mixture in which my parcels were cooked.

I bought an ENORMOUS piece of pork belly while shopping for this recipe and so if the weather cools on Sunday as predicted, Tung Po Pork should be next up on our challenge menu.
Posted by Kate R at 8:11 AM No comments: