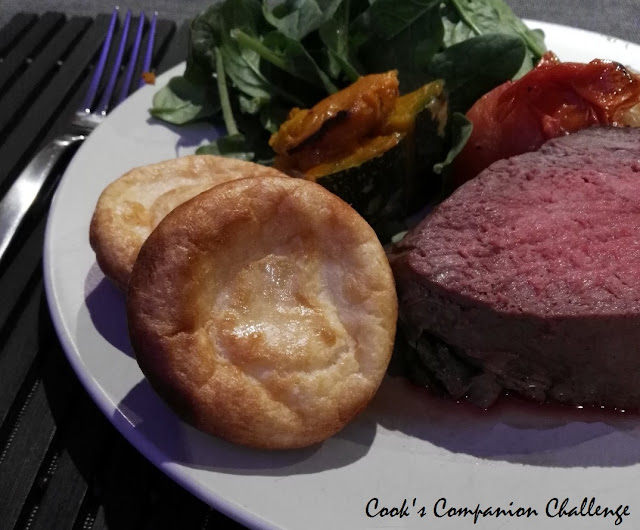 Yorkshire puddings are something I have never quite understood. First of all, because they are called puddings. And they are not sweet. Which is a little weird. Secondly, because they are random little rounds of pastry to be eaten with a roast dinner. Sorry, what?

So last night was my very first experience with the humble Yorkshire pudding. They were dead simple to make so I wasn't too worried about the fact that I was unlikely to enjoy the experience. I was nonplussed. And then came the moment that I tried a little bit of pudding with a piece of roast beef. Oh, oh, oh I get it now!! One mouthful took me straight back to the Beef Wellington I made around ten years ago and everything about these little puddings finally made sense.

Pastry and beef. Who knew? Well every person in England, obviously.

Repeat performances guaranteed.
Posted by Kate R at 8:46 AM No comments: 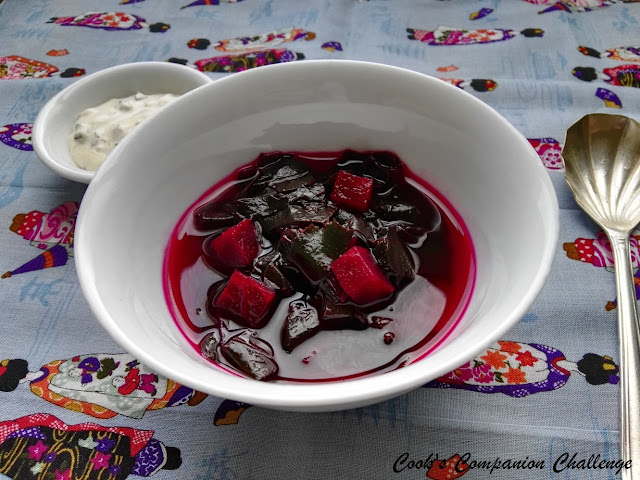 Something I learned while making this is that the inside of a freshly boiled beetroot is hotter than lava spewed from a volcano. My boys call me Khaleesi because I am generally able to handle heat that most people would find unbearable, but even I had to wait for the raging insides to cool down before I could handle them for any length of time.

A lovely little mixture of sour cream and herbs is mixed into the soup before eating and as well as turning the concoction a gorgeous shade of light pink, the taste of the soup becomes sweet and incredibly moreish. I used fresh parsley and chives but confess to adding dried dill because it was all I had. I am so pleased I did though, because the dill was the best bit!

The addition of the beetroot leaves was absolutely brilliant and I was surprised to discover that they taste just like silverbeet. Even though the names of both vegetables have beet in them. Still surprised.

We all know I hate waste and so the strained beetroot was added to our pasta sauce tonight. I say pasta sauce, but in reality I was making soup. After blitzing the soup, I decided to add some pasta, added added a bit too much and then had to laugh as I watched it suck all of the liquid out of my soup as it cooked. So pasta sauce it was. Thankfully, it was incredibly delicious as well as just a little bit pink. 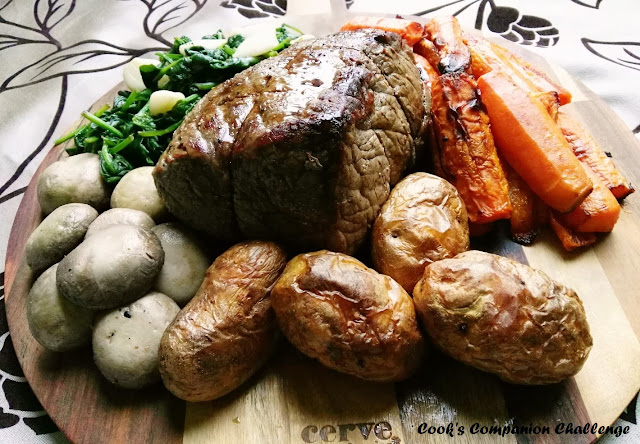 I had a backyard full of tradies today and so spent the day cooking so that I could keep an eye on what they were doing...hopefully without making it look too obvious!

My husband usually smokes our beef roasts outside on the chiminea (which taste amazing!) and so this is the first one I have cooked in some time. The recipe looks terribly complex but if you skip the making of the red wine sauce it is actually not too onerous.

Interestingly, the mushrooms are boiled in buttery water; a method I have not tried before. They turned out beautifully so I now have a new way to prepare mushrooms other than roasting, steaming or frying in butter. Given that I didn't make the sauce, I decided to boil down the mushroomy, buttery water to a paste and add it to the meat juices. I used mirin to boil the meat juices from the pan and so the resulting sauce was full of flavour with a slight sweetness to it. Given that I can no longer drink red wine (yes, shattering) I found this concoction to be a wonderful alternative to the red wine sauce.

Apart from the carrots, everything in the picture is a part of the recipe, with the spinach being cooked down in a knob of fabulous parsley butter (a method I highly recommend) and the potatoes simply scrubbed, oiled and roasted.

The tradies are back tomorrow which means another day of cooking. On the menu? Chicken liver pâté, kale chips, chicken san choy bau and vanilla ice-cream. Not to be served together.
Posted by Kate R at 7:10 PM No comments: 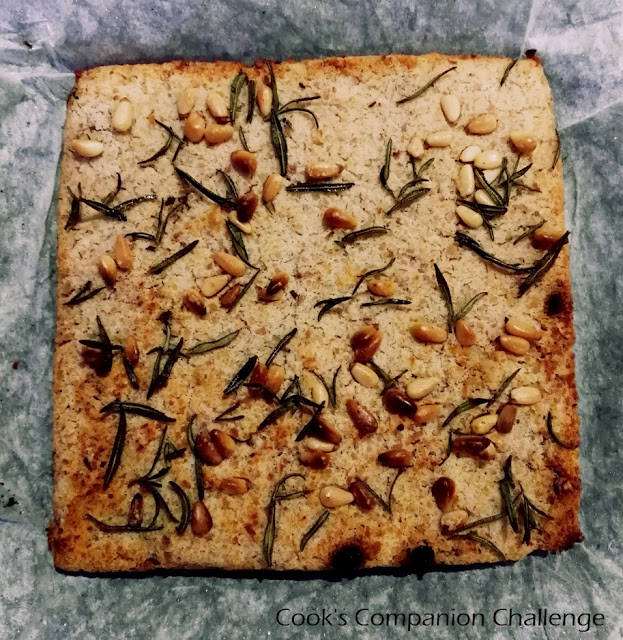 Given that castagna means chestnut I did feel a little guilty substituting the chestnut flour for Bunya nut flour in this recipe. What a lovely way to use up the bunya nuts, though!

I was recently reading the diary of Governor Hunter, written around the time of the landing of  the first fleet, and he described what could have only been a bunya nut.

"There is likewise a nut, which had violent effects on those who ate it unprepared: the natives soak it in water for seven or eight days, changing the water every day; and at the expiration of that time they roast it in the embers; but the kernel is taken out of the hard shell with which it is enclosed, previous to its being put into the water: it is nearly equal to the chestnut in goodness."

Apart from the fact that I made the flour from scratch (read: boiling, peeling, dehydrating, blitzing) the castagnaccio was very fast to make. It was interesting that I needed to add quite a bit of extra water and still didn't quite get the mixture to a porridge like state. I can only assume that the properties of bunya nut flour are quite different to that of chestnut flour even if they do taste practically the same.

The only thing I would change if I made this again is to increase the number of raisins I threw in (we didn't have sultanas) as they add a really beautiful sweetness to the slice. We have discovered, however, that the castagnaccio is sensational with a drizzle of honey, therefore slight lack of sweetness crisis averted!

After a weekend of partying (yes, me!) this gentle bout of cooking was a lovely way to finish a fun but quite exhausting weekend. 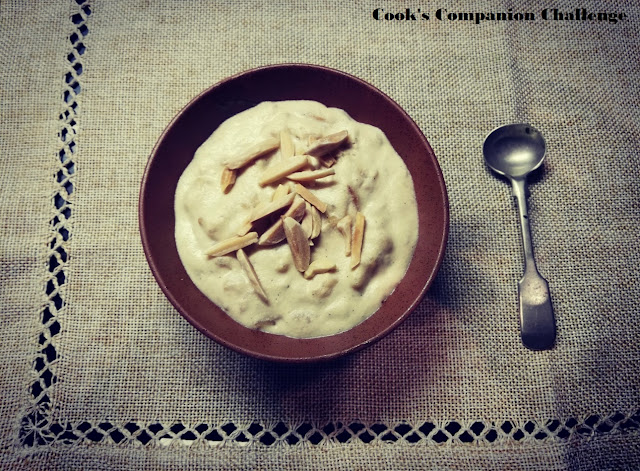 Two recipes in a matter of days - I wonder if anybody can tell I am on holidays?

This was another one of those absolute gems that we all fell in love with after the first bite. It was creamy, crunchy and had the most incredible flavour thanks to the toasted almonds, vanilla bean and perhaps also the coconut sugar I used in place of regular sugar. The coconut sugar was also responsible for turning the dessert a beautiful light brown colour and I am fairly sure also added to the incredible caramel smell that wafted up at me as the rice was almost finished cooking.

The mixture was supposed to be left to simmer but mine developed quite a decent lumpy skin after about fifteen minutes so I decided to stay and stir it until it was done. It was probably for this reason that it took a bit longer than thirty minutes to cook, maybe closer to thirty five. It's easy to know when the rice is ready because all of a sudden the mixture seems to thicken perfectly.

As I am wont to do, I experienced a complete brain fade as I was finalising the recipe and instead of reserving half of the toasted almonds to scatter on top, the whole lot got tipped in and stirred through. Of course toasting more was not a problem and I was completely fine with the extra nuttiness. I never have flaked almonds in the house and so always replace them with slivered almonds which I love because they provide a fabulous crunch.

Either we are dainty eaters or this recipe is very generous. I halved it and so it should have served four but I could easily have fed six happy people with the amount it made. With a second night of this fabulous dessert looming, I am definitely not complaining!
Posted by Kate R at 9:06 AM No comments: 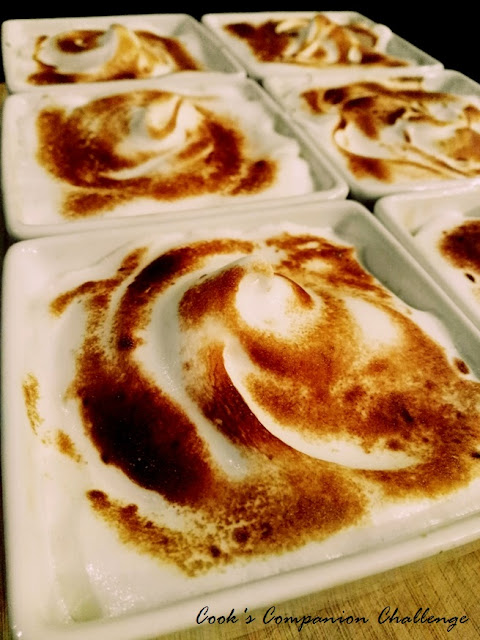 What better way to use up old crusts than in this wonderful pudding!

We keep our bread in the freezer and because the boys don't love crusts in their sandwiches, we have many packets floating about with one or two crusts left in each. I was hoping to use more, but I think this recipe helped us to get rid of three or four which is a good start!

Hiding under the gorgeous meringue is a layer of home-made apricot jam (yes we still have plenty!) and below that, a good amount of custardy pudding. It is a very sweet dessert so I am pleased I split  it into the recommended six serves rather than four.

Study has finished for now (which means lots of cooking!) and so just for fun I thought I would share the top ten interesting things I learned this study period.

1. Mugshots from the 1920s were infinitely more stylish than they are today. 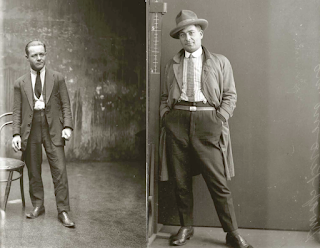 2. The phrase “Reading the riot act” comes from old British law that made it illegal for twelve or more people to congregate in a public area. An official actually had to go out and read the act aloud to the group which included an order that they had one hour to disperse. Failure to do so resulted in a charge punishable by death.

3. On the upside, prisoners who were sentenced to death were allowed to stop at the pub for one final drink on their way to the gallows. Seriously.

4. The meaning of the phrase: “Rule of Thumb” actually has a pretty awful origin. It comes from a statement made by a judge that moderate beating of your wife was OK as long as the stick was less than the diameter of your thumb. Good to see they at least put limits on the accepted barbarity.

5. Because Australia was the dumping ground for British convicts, there was a joke in England that the kangaroo’s pouch was designed by pickpockets.

6. One of those convicts, Amelia Beard, had an amusing piece written about her in the newspaper after she assaulted a policeman. Apparently, she “commenced a volley of abusive language against him, accompanied with a pantomimic exhibition of talons and legs, which left most remarkable notice of her visitations upon his person.” So, she swore, kicked, scratched and left the policeman with visible injuries. Early 19th century was definitely a more interesting time, linguistically.

7. Everybody knows that the gun laws in America are crazy and the police don’t seem to know how to keep their guns in their holsters. It’s quite the opposite in England where the police remain unarmed to this day. A couple of years ago there was a proposal to arm the police in London and the police voted against it, with 20% saying they would actually quit if they were forced to carry a gun. I am also a firm believer that guns beget guns so kudos to the British police.

8. Jail as punishment wasn’t really a thing in Britain until the mid-19th century. There was a model prison built in 1842 which kept prisoners in their cells almost all day every day. When they did leave, they had their faces masked to ensure they could not interact with any other prisoners who might corrupt them. Not surprisingly, they found that “a disconcerting number of them were going insane”.

10. There is good evidence that Ned Kelly did not actually say the words, “Such is life” prior to his hanging. Apparently, making stuff up to sell papers is not a new phenomenon. Who knew?
Posted by Kate R at 8:14 PM No comments: