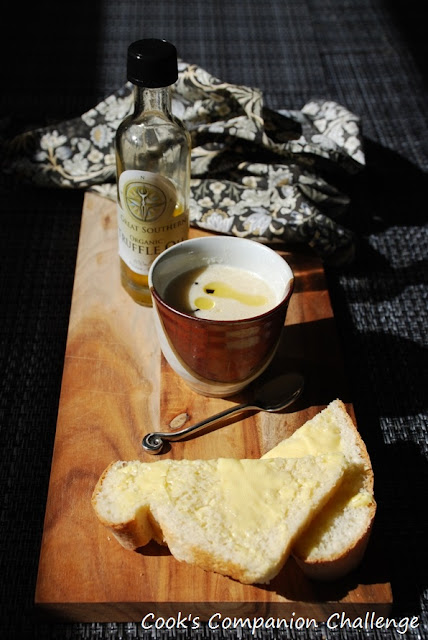 It has been a crazy couple of weeks in our house and with things finally settling down, I felt the need to cook something soothing and warm.

As much as I would like to say that I headed out and bought a 50g truffle for this recipe, I decided I just couldn't part with the required $125 in order to construct a mid-week meal. In fact I changed quite a few things around as I made this recipe, making do with what I had in the pantry and compensating for those things I simply forgot to stock up on.

The onions - Generally I would have onions in the pantry, but not today! I decided the caramelised onion we were storing in the fridge would be a wonderful substitute...until I realised we had run out of those too! As a substitute, I used a few scoops of onion marmalade. A bit odd, but it worked.

The truffle - As previously mentioned, I skimped and used truffle oil. I did, however, fish out the piece of truffle from inside the oil bottle, chopped it up and added it to the soup, saving just a little for garnish. We also drizzled some truffle oil into our bowls and it was seriously good. Not as good as fresh truffle of course, but fabulous nonetheless.

Stock - I used pre-made chicken stock but given that it comes in 1 litre containers, decided to top up with 500ml of water. Half containers of stock NEVER get used in my house and I simply can't bear food waste.

Potatoes - Whilst I DID have potatoes, I was around 50g short (doesn't anybody go shopping around here?) and so made up the difference with some extra cauliflower.

Wonderful and easy, we were all thrilled with this soup tonight.

...and the home-made bread was pretty fabulous too x
Posted by Kate R at 9:31 PM No comments: