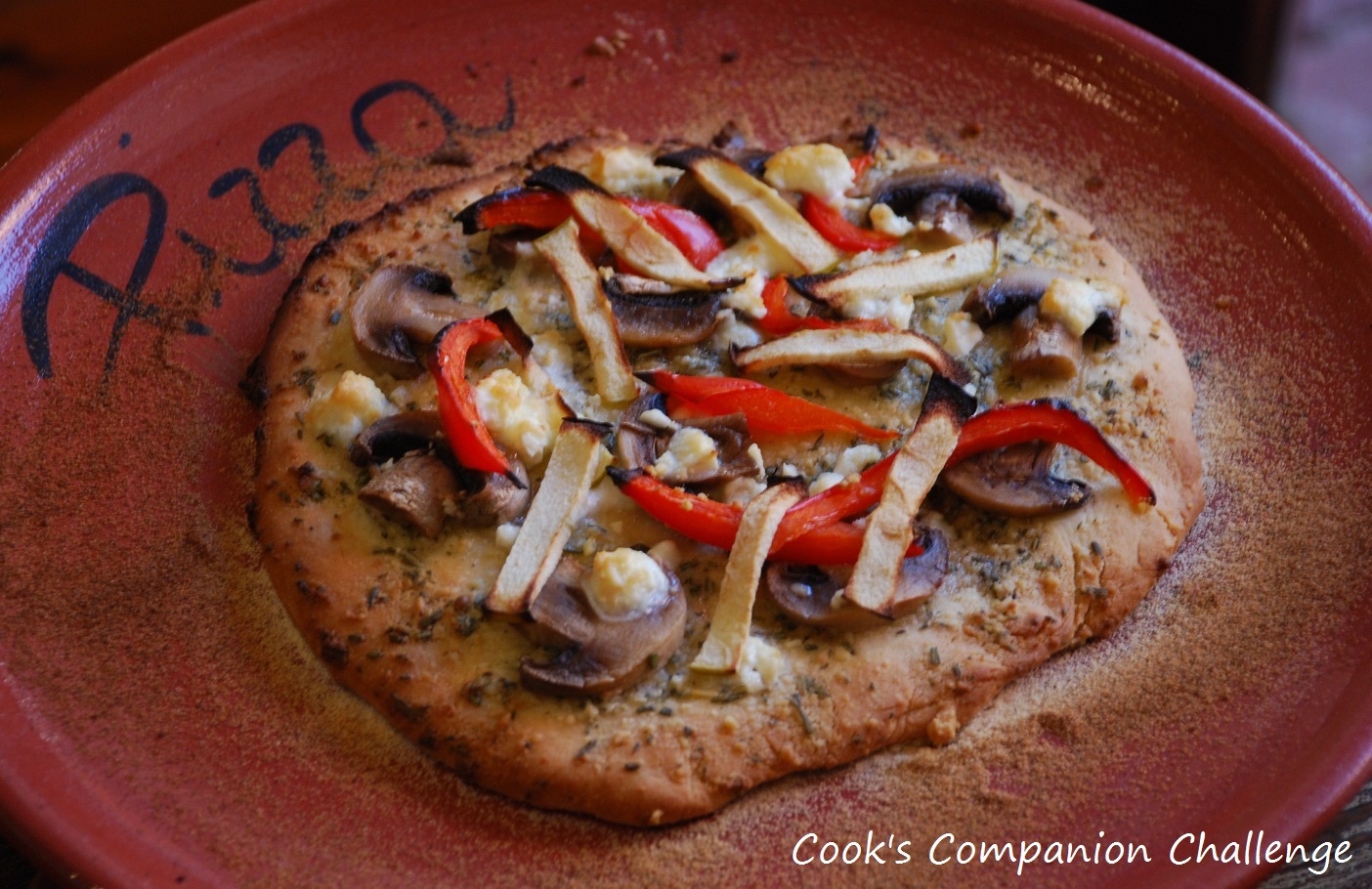 We are lucky enough to have a very substantial rosemary bush that serves us all year round. Tonight's pizzas featured Stephanie's rosemary 'pesto' which was a lovely base for my topping of mushroom, capsicum, apple and fetta. It was simple enough to make, with my Thermomix doing all of the work combining the garlic, pine nuts, rosemary and oil.

I used Stephanie's buttermilk pizza crust recipe tonight but replaced the buttermilk with a mixture of milk and natural yoghurt which seemed to work quite well. For every cup, I used about two tablespoons of milk and the remainder of yoghurt. To ensure the pizzas did not stick as I slid them into the oven, I sat the dough on a dusting of flour and semolina, which I also used on my pizza stone.

The boys both requested Margherita pizzas (extra cheesy!) and so avoided the pesto altogether, using oregano as their herb of choice. Of course this means lovely leftovers so I will be looking for another use for this tomorrow! 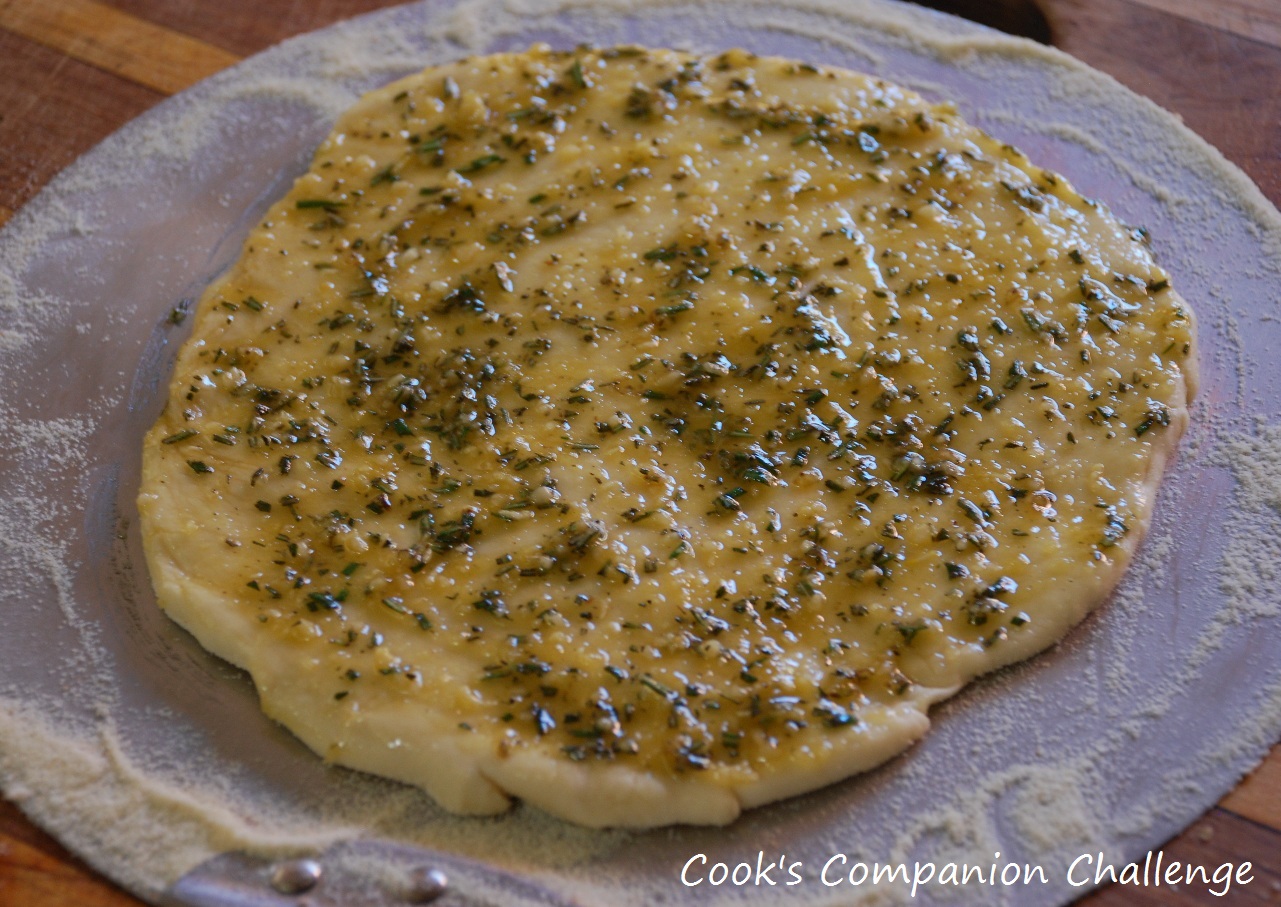 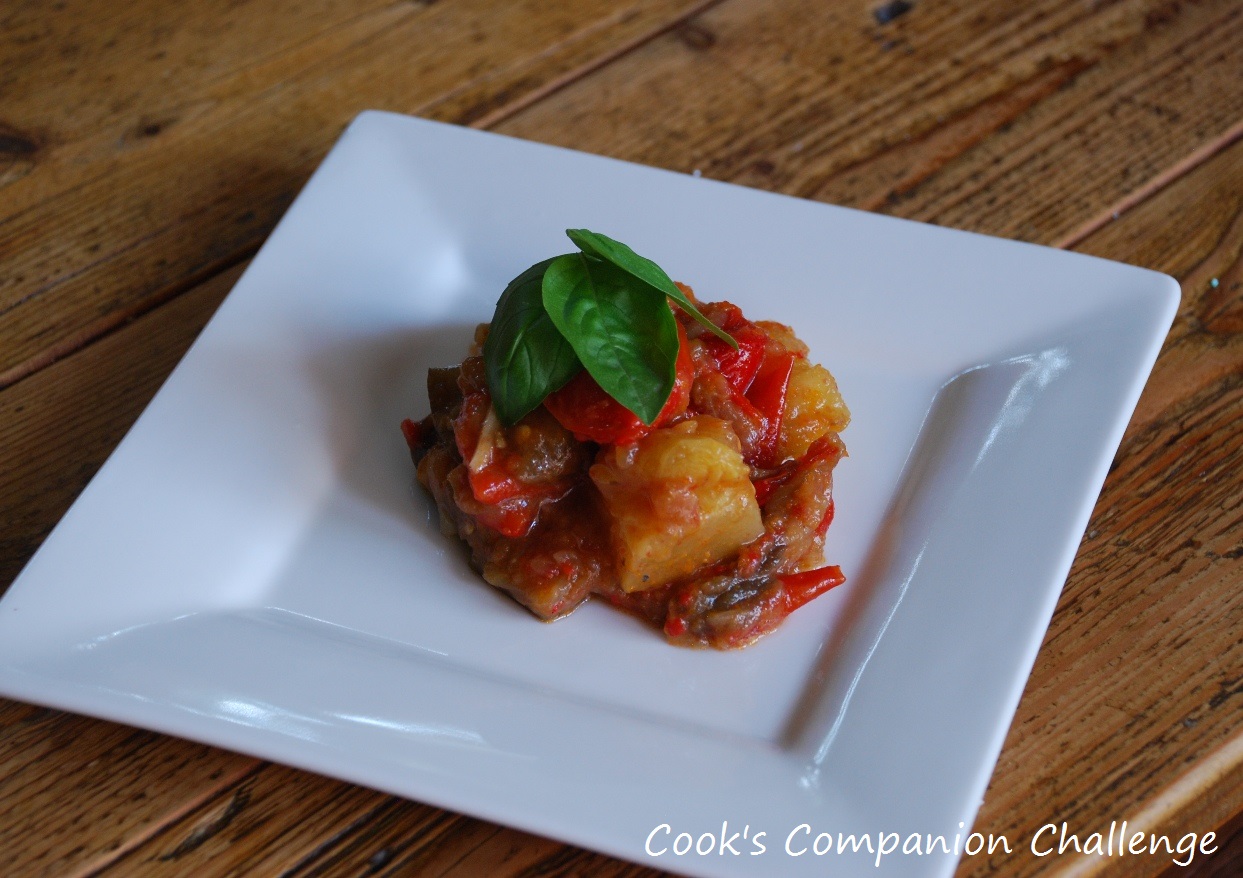 When I piled the first half of the vegetables into the pan to cook, I was a bit shocked at the amount and seriously questioned whether I should have halved this recipe. When the dish was cooked and I had my first taste, I was glad I hadn't!

I was in a bit of a rush to get dinner on the table by the time the tomatoes were to be added to the pan and so I threw them in unpeeled. As if to keep the universe in balance, I peeled the zucchini instead! This is not something I would normally do but the enormous zucchini I had picked from the garden was lovely inside but had unfortunately turned a bit woody on the outside and down one end. My chickens were thrilled with the extra scraps so I didn't feel too guilty throwing some away.

I can highly recommend cooking the onions for a long enough time that they start to caramelise, convinced that this was the reason my ratatouille was so wonderfully sweet.

Being the resourceful person that I am, and also because this recipe makes an ENORMOUS pile of ratatouille, we ate this three ways over three nights. The first night we ate it as is, alongside slices of barbecued chicken. The second night was tipped over pasta as a simple sauce, and day number three saw the remainder baked in the oven with eggs, chorizo and leftover pasta.

I am still not sure which version I preferred! 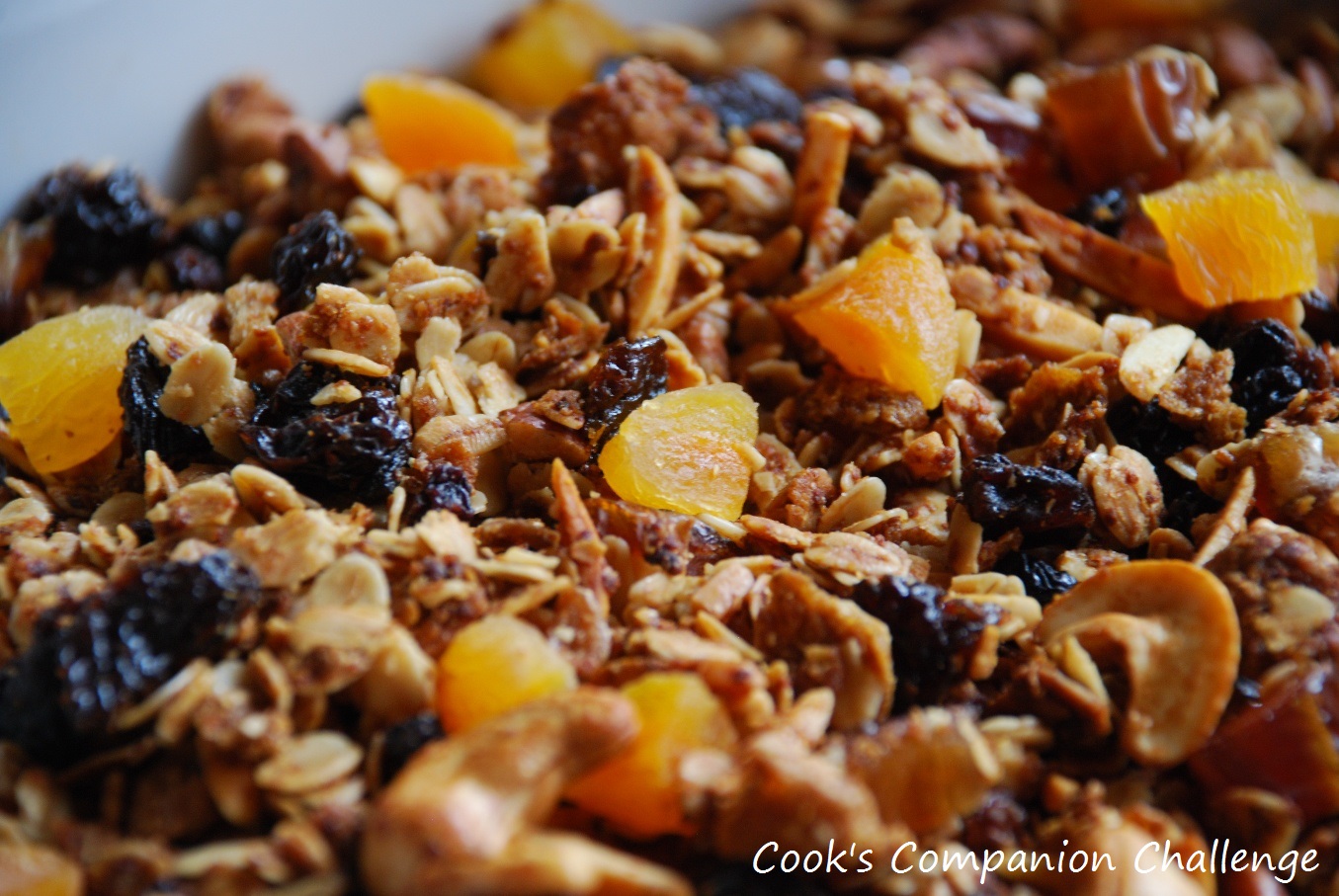 This is one of those foods I would like to munch by the handful, but where instead I have learned to show some restraint.

I have always adored granola, or toasted muesli, and I especially like the home-made variety. Not only is it a million times cheaper than store-bought, but I also get to choose all of the ingredients. Of particular importance to me is the oil in which the oats and flakes are baked. I decided to substitute the grapeseed oil in this recipe for coconut oil, while I believe to be healthier and quite frankly I always have it in the cupboard and it tastes wonderful.

Instead of buying bran flakes especially for this recipe, I simply used sultana bran minus the sultanas. Yes, I did stand there and pick the sultanas out one by one; really is anybody surprised by that? I also meticulously cut all of the raisins in half as I am not a huge fan and do not fancy the idea of getting a mouthful of dried fruit that overpowers the deliciousness that is the toasted oats and flakes.

The boys have already tried this out as a snack, sprinkled over natural yoghurt and have given it a big thumbs up. I was not terribly surprised; I imagine I could probably bake cardboard in honey and coconut oil and it would taste fabulous. 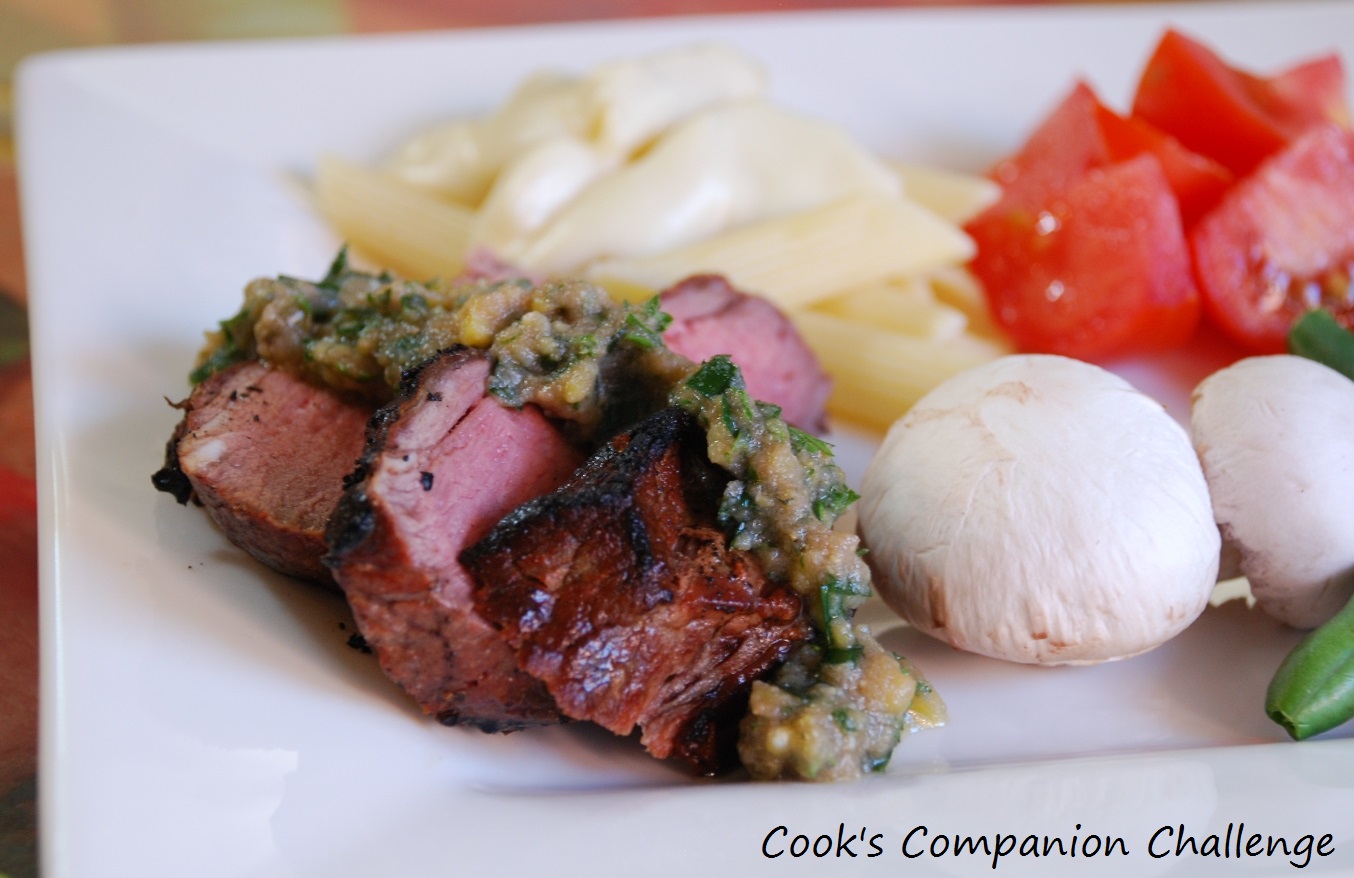 The Cook's Companion certainly contains a lot of fabulous recipes, but most importantly there are just so many very simple sauces and sides that can be prepared in a matter of minutes.

I know I say this a lot, but I adored this sauce and will definitely be making it again to top cold meat, eggs or vegetables. Wanting to reduce the clean up afterwards, I didn't push the egg yolks through a sieve, but simply mashed them with a fork. Also instead of using red wine vinegar I used the beautiful Australian Harvest organic red wine jus that I bought at the Royal Melbourne Show late last year. Jules was thrilled as he was the one who nagged me to buy it, little gourmand that he is.

Made the day before we ate it, with salty capers, tarragon that smelled sensational, chives (I used garlic chives), parsley and a crack of black pepper, this sauce perfectly complemented the meat we had also cooked the day before.

Add some raw vegetables and this was fast food at its best.
Posted by Kate R at 10:33 AM No comments: 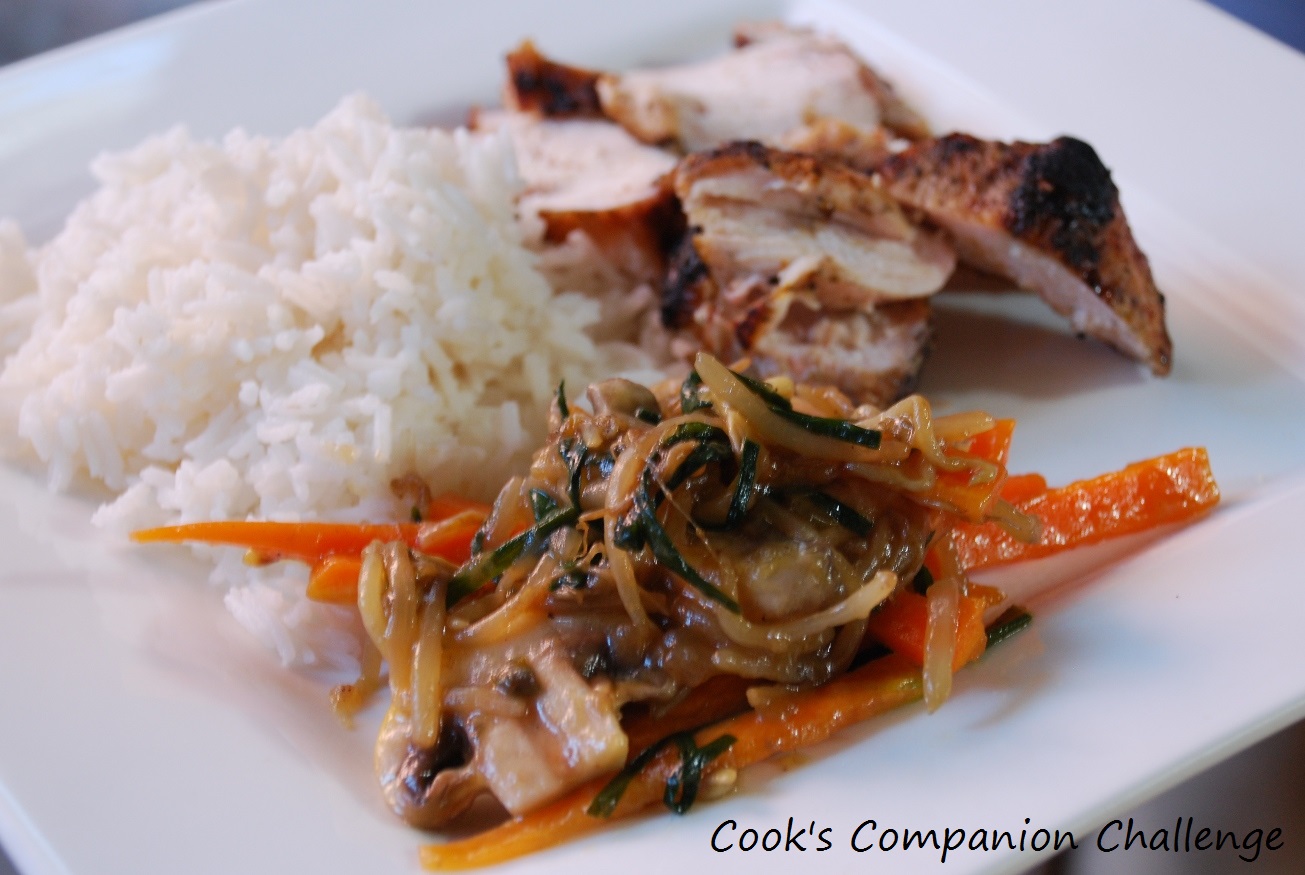 This may not look like much but wait until you taste it!

As ever I was keen to use up some of our beautiful garlic chives which is why this recipe caught my eye. At Stephanie's suggestion I planned to serve this with chicken and rice and organised for Trev to barbecue the chicken as only he knows how.

I had no idea how absolutely fabulous this would be, and when it was made I idly scooped some up for a taste. More excited than I am willing to admit, I dashed into the other room to give Trev a taste and we both agreed that it was amazing and also that there was not nearly enough on the plate to satisfy our family! Given that it only took seconds to make I decided to make it again, double the amount this time!

Later that day when the rice and chicken were ready, I threw my now tripled amount of chives and sprouts (and delicious sauce) into the pan to reheat, along with some carrots and mushrooms.

If you own this book and would like a ridiculously fast way of livening up a meal, you must try this!

Post script: I just realised that I forgot to share a very important substitution that I made! I replaced the oil with coconut oil, which I use like it is going out of fashion. I have no doubt this decadence enhanced the loveliness of this dish.
Posted by Kate R at 8:13 PM No comments: 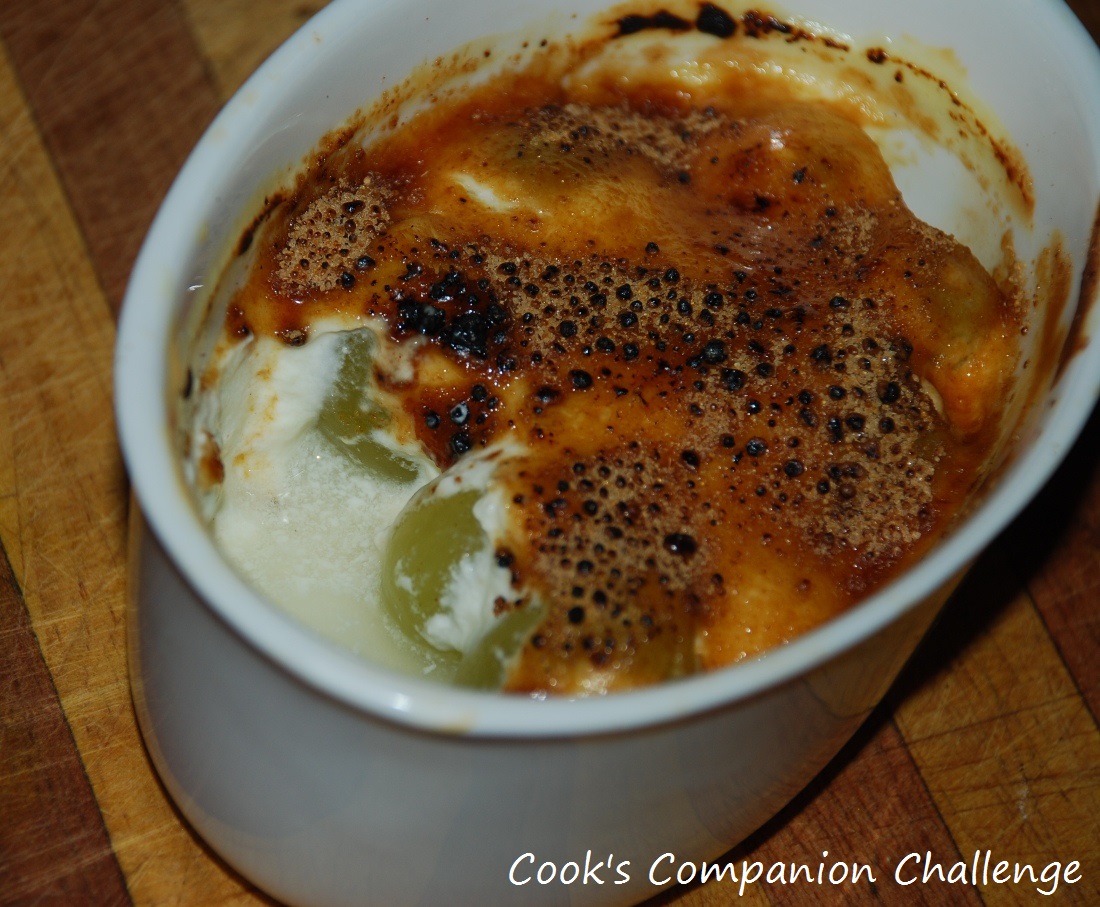 We were all a bit sceptical about this dish. Heating grapes and yoghurt, in my mind, is a bit odd and I expected to be a bit underwhelmed by the taste. My oh my, how wrong I was!

I got a bit impatient waiting for the sugar/ginger combination to caramelise under the griller given that I had already waited a day since I packed my ramekins with grapes and yoghurt. I whipped out my blowtorch to hurry things along and was temporarily elevated toward hero status as the boys sat by, mesmerised by my handy flame-work.

The only disappointing thing about this dessert was the amount; I could have eaten twice this much! Which would have been completely gluttonous of course, and so one ramekin per person is actually the quantity I will stick with when I make this again. The ground ginger in the sugar was unbelievably good and I think I will add some to the topping of my next crumble.

If you are looking for a dessert that takes five minutes to make and is fairly healthy, this is the one! 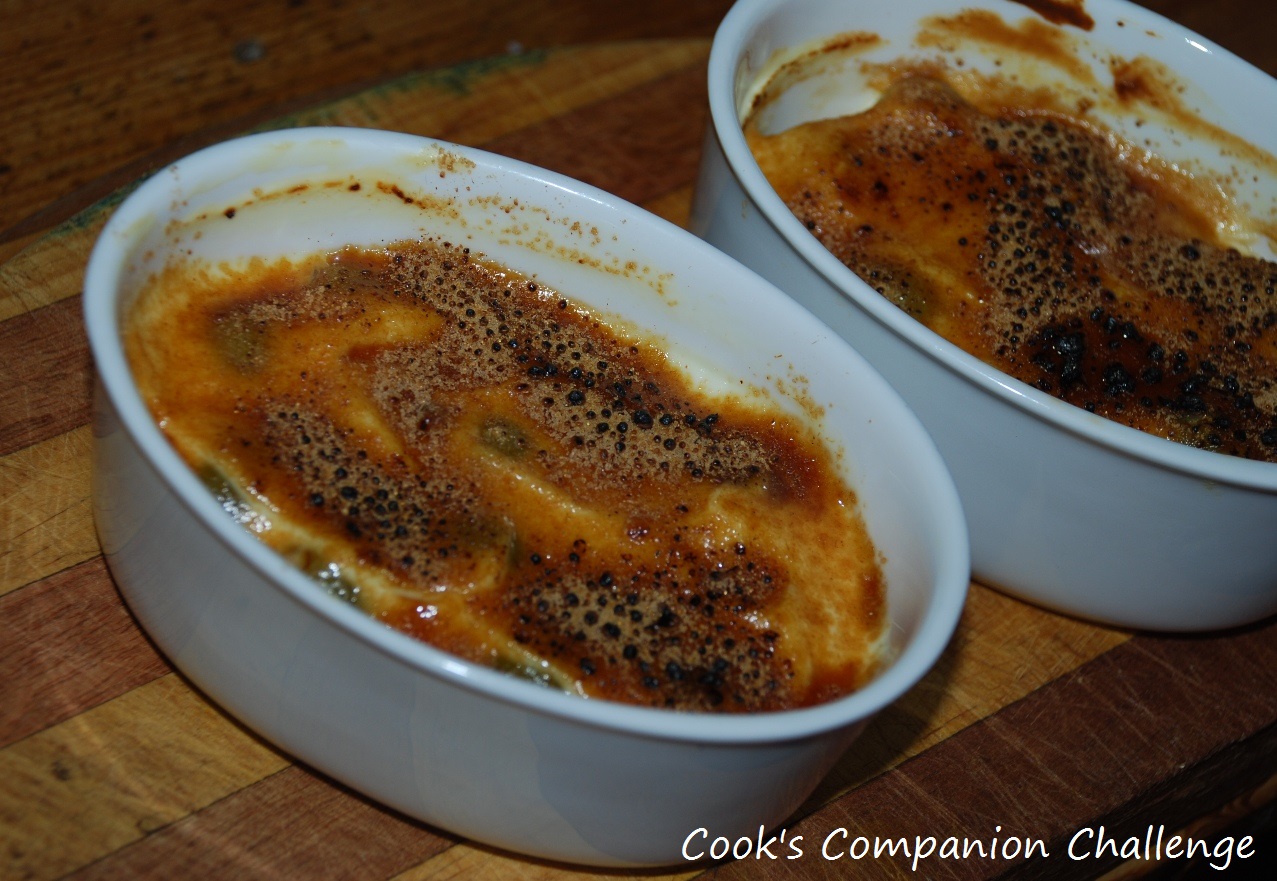 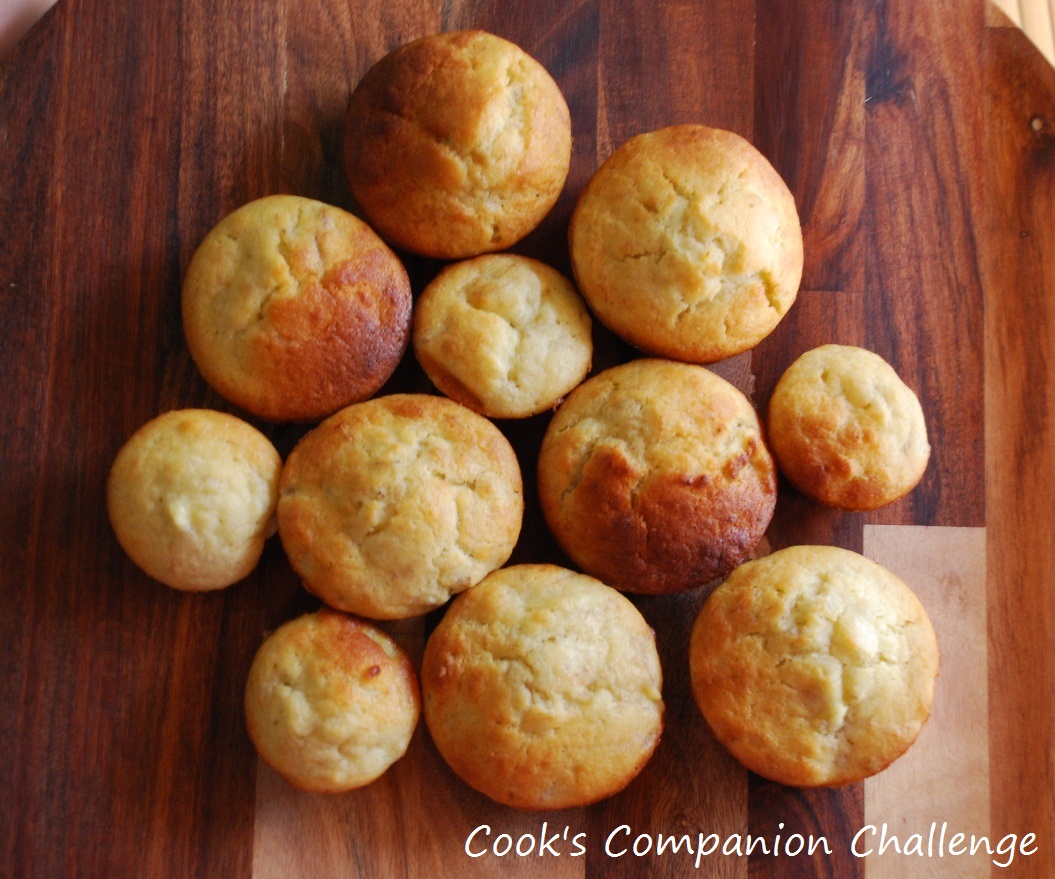 It's a hot, hot day in Melbourne today and if I had any sense I would be leaving the oven well alone. But we are stuck inside escaping the heat, and so what is a girl to do but cook?

I decided to make banana muffins, given the pile of bananas that were beginning to go black in my fruit bowl. In the margin on page 119 Stephanie advised that 150g of mashed banana could be added to the muffin recipe along with the other wet ingredients. I had around twice that (which I really wanted to use up!) and so decided to see what would happen if I threw it all in. What a maverick!

I was a bit concerned as I spooned the batter into the muffin tins, given that it looked like a big pile of mashed banana with a little bit of flour in it. My fears were unfounded however, and out of the oven came slightly wobbly muffins that cooled perfectly and are so full of banana it is fabulous!

Muffins are definitely not the healthiest snack, but if you are looking for a sweet treat or an occasional sweet thing for lunchboxes (adult and child alike!) at least homemade muffins are made with natural ingredients and not a load of scary sounding chemicals and preservatives.
Posted by Kate R at 1:13 PM No comments: