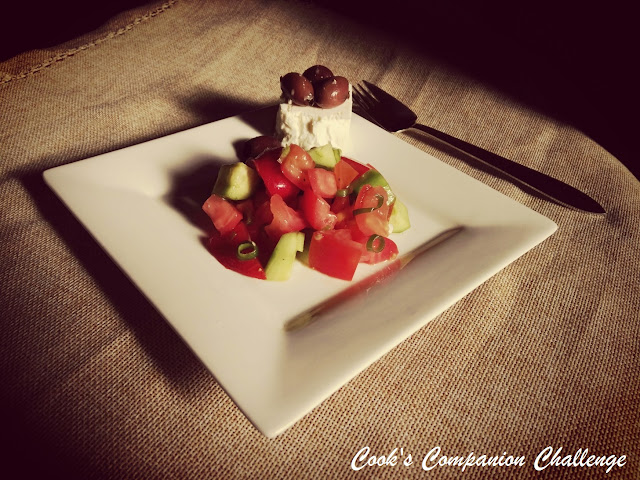 Undertaking a cookbook challenge which spans three editions can be, well, challenging. Each time I upgraded, I spent some time updating my complicated spreadsheet (yes, I was in heaven!). As well as brand new recipes, there were a few recipes which had been replaced/upgraded. In each instance I made the decision that if the change was significant I would add it to the challenge. Mad, I know.

So this is the execution of Greek salad 2.0 aka Ritsa's Greek country salad.

I decided that my boy needed some time in the kitchen and so he was largely responsible for this salad, with me acting as his sous chef. I think our favourite part of the preparation was squeezing the tomato juice over the salad. Getting hands dirty in the kitchen is most welcome here!

With the absence of green pepper and red onion noticable in my kitchen, I replaced them with a red pepper and spring onion. 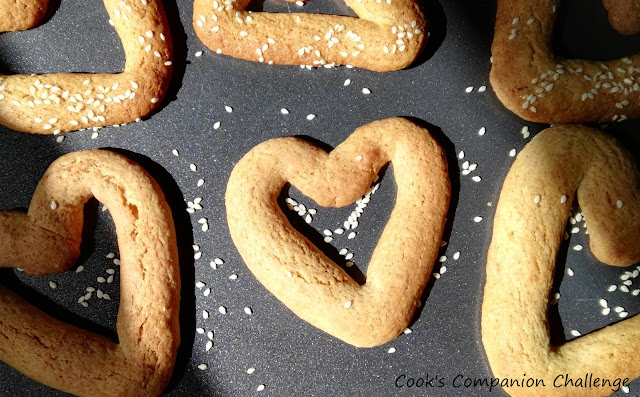 Valentine's Day is just not a big thing in my household. For the many, many years my husband and I have been together, we have largely kept February 14th unromantic and uneventful.

This year I decided to change things up a bit; perhaps because we have a special wedding anniversary coming up or perhaps because I am finally getting a bit mushy in my older years. Whatever the reason, Tuesday night's dinner was overwhelmingly heart inspired.

The star of our main meal was to be a pie, filled with the meaty leftovers from the previous night. Given my husband's love of homemade pastry (and the fabulous flavour of our leftovers!), I knew this would be an enormous hit. It was as I was laying the pastry that I got the idea to mould it into a heart shape, using a heart shaped biscuit cutter wedged into the top of the pie and two ceramic spoons at the base. The result was wonky but effective.

Dessert was somewhat more spectacular. As I was trawling for an appropriately romantic dessert recipe, I was thrilled to discover these rings which I knew would be easily crafted into hearts. I was amused as my youngest, also known as our resident dough thief, ate a piece of the dough and exclaimed, "Mum, this is a bit heavy on the honey."

"Yes, but I am just letting you know that the honey flavour is very strong."

Thanks mate, got it.

The creation of the first tray load of biscuit hearts was successful, if a bit sticky. Thinking I was improving the process, I rolled the second half in a dash of flour to reduce the stickiness, which worked beautifully, but unfortunately meant that the sesame seeds did not have a chance of adhering. Live and learn!

Thankfully both versions (seed and no seed) were delicious x