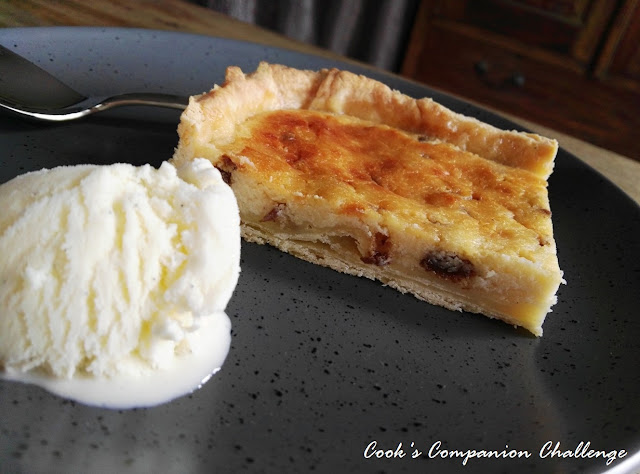 Last night we had a group of wonderful friends over for our first dinner party in ages. With plenty of other things going on, I decided to outsource the main meal to my husband and focus on bread and dessert. Given my recent foray into the wonderful world of sourdough, the bread was an olive sourdough which I served with olive oil and homemade dukkah. Not only did it taste fabulous, but it was actually purple inside - a result of the beautiful olive tapenade which was blended through the dough.

Dessert however, was my favourite part of the night. Two of my guests were English and so I thought it only fitting to include an English item on the menu. Made with home-made cottage cheese and home-made pastry, the result was incredibly sweet and paired beautifully with lovely vanilla bean ice-cream. The only substitution I made was to include chopped raisins instead of currants which didn't look as pretty but tasted wonderful. One of my English guests was not familiar with the the idea of a curd tart, but as soon as he saw it, he told me that he was fairly sure his mum used to make him the same thing. Win!

Because I made everything from scratch I estimate the entire cost of the tart to have been only a few dollars. Not bad considering it made enough to feed ten!