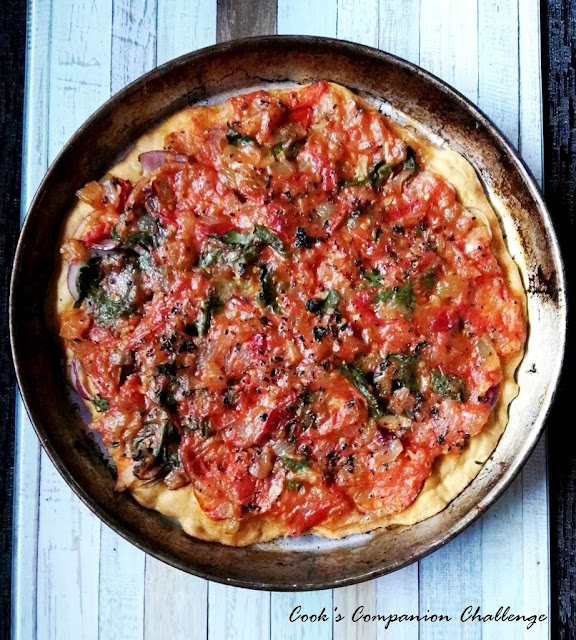 There is nothing more fabulous than having a meal that can be tailored to the preference of each diner. In my family, we each like our pizza toppings to be applied differently but a common theme is definitely to ensure the amount of topping is not stingy - the more, the better! This rocket and oregano version was a brilliant example of a generously endowed pizza.

Preparation began with me drying oregano for the first time, which I did in my trusty (and much loved) dehydrator. The taste of home-dried herb is quite incredible and much more flavourful than the store bought variety which I suspect is the result of two things. Firstly, there is the fact that dried herbs lose flavour over time and my little batch was only out of the ground for a day before it was eaten. Secondly, I think we get more than we bargain for in the store bought versions. I remember many years ago reading the results of testing that had been done on various packets of herbs and the percentage of the expected herb in the contents of the packets was disturbingly low. While I don't think this is necessarily a problem in every case, I have no doubt a good amount of stem also finds its way into even the most expensive varieties, whereas my stems were discarded after the gentle removal of the oregano leaves and flowers.

The home-made tomato sauce was another fabulous element of this pizza which I made from gorgeous fruit from our own little garden. I didn't bother removing the seeds which is a good method if you have the patience to spend a bit of extra time boiling the additional liquid from the sauce. By the time mine was done, the tomatoes had collapsed on themselves so beautifully there was no need to mash it. I have made this recipe on numerous occasions and its fabulous smell gets me every time - which is why it was so very difficult to leave this pizza to the rest of my family to eat. As it turns out, tomatoes are one of the foods that make me sick. In fact, they are up there with one of the worst culprits. Which is a damn shame because I generally eat tomato (well, ATE tomato) in some form on most days, and so it is with a heavy heart that on this night I left the tasting, and reporting of said taste, to my family.

As I built the pizza, the addition of the rocket before it was cooked made me nervous and I was very much anticipating the creation of a pile of little burnt leaves. Thankfully, the recipe included clear instructions to add the sauce after the rocket, which provided the all important clue that the sauce was to provide the required protection for the fragile leaves. I made sure to slather it liberally and evenly and was thrilled to see that the rocket survived the intense heat of the chiminea and even retained some of its beautiful colour. With the addition of a crisp red onion layer, this pizza included a medley of flavours that were always going to please. By all reports, the pizza was a roaring success and was one of the first to disappear from the dinner table.

Apparently the taste was made even better by the buttermilk crust - found in the basics chapter and a wonderful option for the impatient or time-poor cook. I am fairly sure not everybody was thrilled with our pizza dinner given the smoking our chiminea decided to do on this night, possibly due to the increased moisture in this particular batch of wood. A thick plume of smoke poured perfectly over the fence to where our neighbours were sitting and I am fairly sure the conversations dissipated not long after this began. Probably not a great way to maintain good neighbourly relations and definitely a good reminder to ensure our wood is well-dried in future.

To the next pizza night!