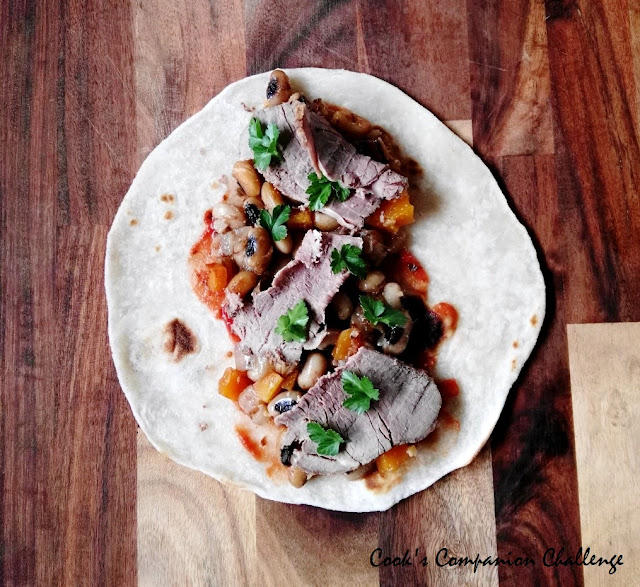 Given how often I use my copies* of The Cook's Companion, I am a bit paranoid about keeping them in good condition. As a result of this paranoia, I generally transfer recipes onto a scrap of paper (in edited shorthand) which I refer to when I cook. I am not embarrassed to admit that every now and then this causes an issue.

Somehow when I transcribed this recipe I neglected to include the amount of hot water the tomato paste needed to be mixed with and in my head, was assuming it was only a couple of tablespoons. Thankfully logic took over and I realised the beans would need hydrating as they baked. A quick check of the book confirmed that it was actually a litre of hot water I needed. Minor crisis, and likely a pile of rock hard beans, averted!

I made this roast on Father's Day, mostly because I promised my husband a lazy day devoid of household duties. This was definitely a promise I was regretting as I stumbled around in the fog of a sleep cut very short at either end. We attended a party the night before (disco themed and fabulous) and so sleep did not begin until 2am and then was sadly cut short five hours later as car doors began to bang out in the street. Given the level of additional difficulty imposed on my cooking abilities, I was particularly thrilled with how everything turned out.

I cut the cooking time by a third for the meat as I always do when using a fan forced oven. Unfortunately this meant that by dinner time, the beans were not quite done. Given my self induced exhaustion, we decided to eat the roast with steamed vegetables, saving some to eat with the beans the following night. The lovely wrap pictured is the result of yesterday's much more impressive effort! Home made flatbreads were the perfect accompaniment for the lamb/beans combo and we also stacked freshly chopped tomato, capsicum and cucumber on top for freshness.

Anybody with the second or third edition of The Cook's Companion will be disappointed to know that this recipe appears only in the original version. The good news is that there are similar recipes on the internet for anybody keen to give it a go. Well worth a try.